I Won’t Go Back to Buying Mac

Here’s a little topic I wanted to explore in written form – why I have used Mac for so long, why I still have a Mac as my main desktop…. and why despite this I won’t buy Mac again.

I Used to Love the Mac

My first computers were of course not mine – they were my dad’s. I have a vague recollection of us having a PC with 8” floppy drives and having to type commands… this was probably in 1987 or so. But that memory never really took hold, for very soon after, my dad bought a Mac: an LC II that I think is still in the cellar due to me insisting on not throwing it out.

It was graphical, it was friendly. It supported 16 colours (and not just 8 colours like many PCs still shipped with as standard). There was no command line, you could just click for everything. It was a revolution in home computing and we were on the cutting edge.

We were continually treated, with Macs, to the newest and greatest home technology: stable systems to run months without a single application crash (System 7.5.1 I particularly single out), advanced graphical UIs (Mac OS 9 was great comfort to the eye at the time), easily automated applications via AppleScript, including a fully scriptable Netscape Navigator; the first laptops and desktops with built-in Wifi, the first LCD desktops where the entire computer was hardly wider than the screen, the advent of UNIX-based systems on the home computer. Every Mac shipped with a full productivity suite included (what would become iWork), as well as a full media editing suite (photo editing, video sequencing, and audio production, which collectively would become iLife), and a couple of well-designed, full-on 3D games to boot. There was hardly anything you couldn’t do with a Mac I thought…. except perhaps write programs for Windows.

When the time came for me to go to university, I believed I would have to get a Windows PC to allow me to do some proper programming, not knowing that we’d be using many different and equally (even more so) viable systems for programming on. It was a mistake I do not regret, as it had great learning benefits to me, and gave me the ability to understand the Windows paradigm so many people endure, and the ability to operate in the average workplace; but after that laptop died (in a literal puff of smoke after an ill-fated attempt to “repair” it), I was back to buying a Mac in 2007.

Even in 2011 I was agonizing over whether or not to spend hard-earned cash on a new MacBook Pro or not. I drew up my list of pros and cons, and decided, over a solitary steak and pint, that yes, I did want that Mac after all.

It would be the last Mac I would ever personally buy.

The Mac – the good

The year is 2015. I still have that MacBook Pro. And it still serves as my main workhorse for spinning up Linux virtual machines. 4 years on, and it’s still the most powerful computer in my home.

It has a quad-core i7 hyper-threaded processor at 2.2 GHz, effectively  showing up as 8 cores – it’s the same processor family as found on entry-level business servers. I’ve upped the RAM to 16 GB. It has a 500 GB HDD.

Most computers even today ship with 4 GB RAM and a lesser i5 processor clocked at 1.7 GHz and not hyper-threaded, and still a 500 GB drive.

Needless to say, that Mac was a fantastic investment, as it remains still more powerful than an equivalently priced Windows PC on today’s market.

So why will I never buy Mac again? Put simply: Apple has chosen to go where I will not follow.

Even back in 2011, the Apple Genius who was trying to sell to me was extolling the benefits of the new MacBooks with no CD/DVD drive: “who uses CDs these days anyway?” Well I do, for one. I experiment with computing, and in doing so sometimes break my systems. I need to reinstall the system sometimes. The one time I needed to reinstall OSX, I had to purchase a brand new copy. Gone are the days of providing a free re-installation DVD. These days, you’re lucky if you can connect anything at all.

I don’t tie up my bandwidth with movies and music I have to wait for and download, online, every time I want to consume them. I still buy DVDs and CDs because, in case you haven’t noticed, online “purchase” does not allow you to own a copy – just the license to watch, if it’s still available on the provider’s website (remember mycokemusic.com?). We do not own “our” online movies and music – only the permission to watch them, which can be revoked at any time – with no refunds.

I have become a near-full Linux convert. I use Linux for my personal machines at work, my secondary and tertiary laptops run Linux, and my private cloud servers all run Linux.

Only my Mac doesn’t run Linux, and that only because when I tried to install Linux on it, the graphics card and wireless card decided to throw a hissy fit. Apple’s choice of highly-proprietary components meant that despite the best efforts of open source developers, Apple held on closely to the proprietary mantra: the machine is Ours, you only have a license to use it. You can’t even “own” something as rustic as a tractor these days.

I feel I am not in control of my Mac because I have been told what I can and cannot run on it. I own the machine, but not the software. If it breaks, I just get to keep the pieces – not the ability to tweak and fix.

My preferred computer for “getting things done” nowadays, the one I am currently typing away on, is a Lenovo Flex 15. Lenovo do very good hardware, its pro line, the ThinkPads, are durable business machines much like the MacBook Pros in quality.

They’re also generally highly compatible with open source drivers and mainstream Linux distributions. Where I’d hesitate before buying a Dell or HP laptop as to whether I think Linux will work on them, I have virtually no qualms when buying a Lenovo laptop, knowing it will likely take the erasure of Windows just fine. Not that this necessarily won’t change in the future.

Lenovo was in the news recently for a piece of advertising software called Superfish they had included in new laptops and desktops for a few months in their Windows deployments. This particular set of software and configurations meant that not only were users seeing even more advertising in the web browsing experience, but implementing the advertising solution was also breaking the very core security mechanisms that keep all other parts of the system secure. Lenovo makes great hardware, but they aren’t immune to woefully bad decisions.

Thankfully, they reverted their decision to include this software as soon as their technical analysts realized what had happened, and issued fixes, but it has damaged the company’s reputation.

Persons like myself who chose to erase Windows completely were not affected.

This is why I use Open Source Free Software: to maintain control over my own digital assets, and freedom in my digital life. I am fully aware that my digital identity is tightly woven into my real-world identity, whether I want it to be or not.

I now run Linux on nearly everything – more specifically, I run Ubuntu on my laptops, and a mix of Ubuntu and CentOS on my servers.

What’s more, I remain in control of my data. Not only on my computer, but also in the Cloud. Windows will try to shove you onto SkyDrive and Office 365 Online. Apple is shoe-horning you into iCloud services (yeah, sync your photos all over the place, you can trust Apple… hmmm)… Google is trying to get into both spaces of storing all your photos “for” you and getting up in the online office suite as well. You can’t get an offline Adobe Creative Suite anymore – just keep up the eternal payments if you want to continue being able to access your Photoshop and Illustrator projects. At least they didn’t discontinue their editing suite altogther like Apple did with Aperture. Gone is your investment.

If I ever stopped paying once for any of these applications or services, or if the service is suddenly discontinued, I would stand to lose all my data – everything I’ve purchased, everything I’ve created, either because I no longer have the software to read the files, or because the files themselves have been whisked away to an online vault “for my convenience”. That’s why there’s hardly any storage on Chromebooks. Surrender your data to the Cloud.

I am staying firmly on Linux and virtual private servers that I control and can pull data off of as I wish. I can fully program the computer to make it do what I want – and stop if from doing things I don’t want it to do (granted, some tasks are easier than others, but at least it’s actually possible in the first place.)

One Linux distribution in particular, Ubuntu (the very same I use!), tried to follow the Big Boys like Apple, Google and Microsoft: Canonical announced a partnership with Amazon in the form of search functionality, where any keywords used for a file search was also sent to Amazon, and other online providers. Thankfully, it was easy to purge from the system the minute I heard of it. You cannot defenestrate such “features” with the other Big Three.

I use open source software from centralized trusted software repositories (which were the spiritual precursors to app stores) – I don’t need to hunt around on the Internet to find some software whose source I do not know. On Windows, I constantly need to fret before installing an app: Does it have a virus? Does it have a trojan? Will it send all my purchasing, credit card details, photos and other identity to some unknown third party?

What I get from the centralized repositories constitutes my base web of trust –  and that base web offers a collection of software so large and varied that I know I can get a tool for any job, be it office, media, programming, scientific or leisure, and more.

No piracy = no legal troubles AND no viruses.

Or at least, a vastly reduced risk compared to downloading anything willy-nilly from random websites. And personally, I expand that web of trust with informed decisions.

I use LibreOffice which allows me to read and save in Microsoft’s document format if I need to, but I mainly use the Open Document Format to ensure I can still edit them in decades to come, and that I can share documents with anybody who does not want to shell out for Office Pro, Office 365 or GoogleDocs.

I use ownCloud for my file synchronization so that I can keep control over what is stored, and where. It replaces services such as DropBox, Google Drive, Sky Drive and iCloud without trying to force me to store online-only and forgo local copies. If my account is terminated on the latter services, there’s no guarantee I’ll also still have the data that it ran away with. ownCloud is in my control, and I know I have the copies locally too.

I use Krita and the GNU Image Manipulator instead of PhotoShop, InkScape instead of Illustrator, Scribus instead of InDesign, digiKam instead of Lightroom. I don’t need to be online to do any of this.

In the words of Richard Stallman and the Free Software movement: “Free Software is is a matter of Freedom, not price.”

Piracy might make things surreptitiously free (as in “a free lunch”), but still ties you to the control systems and spyware that is rife on the Internet. 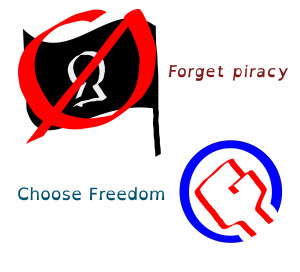 (… graphic of my creation, released under CC 4.0 Attribution Share-Alike. Anyone who wants to make a better derivative is most welcome…!!)