Home » Musings » About that... » Of nesting Latin grammar in English

Of nesting Latin grammar in English

Are you That Person – the one who insists “you mean, there are viri going round, not viruses?” Or that “a single piece of data is a datum.” Whooptidoo – you took Latin in First Grade and now you’re an expert.

I find it rather preposterous to make deliberate use of foreign grammatical rules in the middle of an English sentence, not to mention pompous trying to “correct” other peoples’ use by introducing such jarring disjunction.

Latin words in English are loanwords, as from any other language. The English language, as you might already know, has appropriated numerous words from all over the world, but has long treated them as English grammatically.

You never say that you’re going to order two pizze with your friends; nor do you complain about a single pieróg falling off your plate; news reports might talk about “tycoons” even though the original Japanese distinguishes plurality by context (like the word “sheep” in English); and popular parlance has people talking about French chateaus, instead of the châteaux (note that the “x” is silent, such that there is no phonetic difference between the singular and plural forms).

As for data and datum, the historical usage statistics (as per Google Ngram, however authoritative that may or may not be) strongly suggest that the use of “datum” is a neologism, no doubt introduced by some smugly clever junior editor. I’d argue furthermore that “data” as an English word is an uncountable – like its synonym “information.” 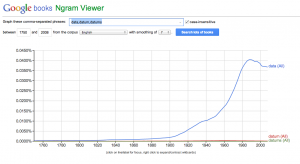 But if you really, really insist that Latin plurals should still be used within English phrases, please consider the corollary.

There is no one plural of a Latin word. Latin is inflective: it uses declensions. Thus, the correct usage of a word such as “forum” would depend on its grammatical role in the phrase – like so:

You might also want to know that you shouldn’t say you “flex your biceps” (in that form it is vocative) – but more correctly, you flex one bicipem, and admire your bicipibum girth — and that in Latin, a “c” makes a “k” sound, always.

Thus it is probably safer (and definitely more consistent) to treat loanwords and set phrases equally as such, and apply English grammar to them. Grammars do not nest well, nor need we make them.