At some point I’m going to compile a list of tips and recipes for lunching at the office – for situations where you only have a spoon, bowl, fridge, microwave and kettle, like many office and lab kitchens I’ve seen so far…

Here’s one such recipe.

Smash – a brand of instant mashed potatoes in the UK – is a fairly easy to come by commodity. Most of my friends shudder at the thought of it and wonder why I even keep any in my pantry.

Now I know better than to use it to serve anybody but myself – but I also know that it can be a perfectly decent fill-in for when you’re too lazy/tired to cook, and can be made to taste perfectly fine – it’s just dessicated potatoes. The trick is not to follow the instructions on the packet – the end result of doing so does indeed taste awful.

Thankfully, an equivalent product I used to eat in France, called Mousseline, gives much better instructions – which I simply re-use here.

Put the Smash flakes in a bowl, along with the butter, salt and pepper, then add the milk.

Add the boiling water now, and stir repeatedly. At first it’ll start off as watery nothingness, and gradually coalesce into creamy potato-y snackage.

If necessary, pass through the microwave for about 15 seconds before stirring, as the flakes absorb the liquids better when hotter, and the cold milk makes the biling water tepid.

Add some peas (not the tinned stuff mind – heated from frozen is best) and ham or frankfurters for a more filling dish.

Voila, easy to make at the office, or in the evening if you want to be minimalist in effort.

This is what I usually have for lunch nearly every day, as I have the priviledge of working from home these days. It gives me the warmth of soup, the ease of noodles, greens I sorely lack otherwise and… meat. 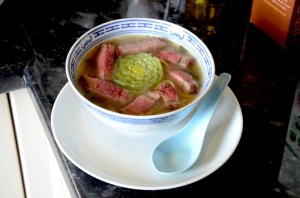 END_OF_DOCUMENT_TOKEN_TO_BE_REPLACED

I have no doubt that a good gravy, or sauce, can transform a dish entirely. However, it’s not all stock cubes and instant gravy powder. In fact, obtaining a perfect gravy is just as easy without those artifices – you just need to have prepared a tiny bit before hand.

Obtaining a gravy from a roast is as easy as adding water to a pan. Nearly.

Before roasting, chop some tough vegetables, such as onions and carrots, and place these in the roasting tin. If you have a rack on which you’ll put your roast, spread the vegetables out evenly in the pan; if not bunch them in the centre and rest the meat on top of the vegetables.

After the first 10 minutes of roasting, add boiling water to the roasting tin – about 1/4in or 1cm deep.

Every 20min or so, check on the liquid level, and keep it topped up with boiling water.

Once the meat is done roasting, remove the meat to a carving board/plate etc. Pour the liquid and vegetables into a small saucepan – you’ll notice that there is fat from the roasting of the meat. This is a good thing. Therein is contained all the flavour from your meat, be it lamb, pork, chicken, beef or otherwise. Reduce this on low heat for about 5min, add salt and herbs to taste. I tend to add one or two tablespoons of crème fraîche to this to give it extra texture and taste, but that’ll be up to you…

You now have a gravy. See? No instant stuff.

This technique is a little more involved, but just as easy. Once you’ve fried your meat (steak, chicken, lamb, etc…) and it’s out of the pan, you’ll notice that there are charred remains and globules of oil and/or fat. These are what will make up the core flavour of our sauce.

Deglazing is about unsticking and bringing together the fat and charred pieces – and we do that by adding a liquid. Strictly speaking, boiled water – 50mL worth (about one or two shots, depending on what your measure are like) – should suffice. You can also use such things as red wine, sherry, or even rum to do this. Go wild. Use about 25mL for the spirits. Or whatever.

Bring the pan back onto a low heat and add the liquid, stirring and gently scraping the pan with a wooden spoon (avoid scratching non-stick pans – removing the teflon coating is particularly bad for your health if it gets into your food, and ruins your pan). When the liquid is coming to a simmer, add a knob of butter, and gently swirl this into the pan. Salt and pepper to taste, and reduce further until the liquid is not quite so runny.

Tip: make yourself some pre-made sauces! I deglaze after frying anything (within reason – maybe not eggs). Specifically, I deglaze after frying bacon in the morning, but using crème fraîche instead of butter. Instead of using the sauce immediately, I keep it for later to pour on a pasta snack later in the day. Tastes like carbonara 🙂

Cheat sauces – when you’ve not roasted or fried anything

One thing I used to do in pubs was to order chips (“fries”) along with some pepper sauce that normally comes with a steak. I detest ketchup, and mayo is not really my thing. The question then is: how did they get a steak sauce without cooking a steak?

Now is the time to use the instant gravy. But not on its own.

In a frying pan or sauce pan, add a teaspoon of olive oil and about 50mL (one or two shots worth, again, depending on your standard) of liquid stock obtained however you wish – stock cubes, pre-packed stock, gravy granules. Bring this to a simmer and add a tablespoon or so of crème fraîche, and stir this in completely. Add herbs and pepper etc to taste.

It is now done. Serve in a dipping bowl next to fries, or simply pour onto pasta, rice, potatoes, refry bread in it… your call. It’s already fairly unorthodox anyway.